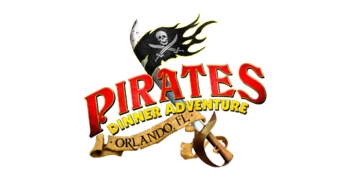 Welcome, royal subjects to the 25th anniversary as a pirate-free town in Treasure Bay! Princess Anita has invited each of you to join in the celebration and gaze at the glory of the magical gypsy mermaid and her jewel of the sea, the Serpent’s Eye. It is said that this necklace holds off a terrible beast - the dreaded Leviathan. We’re all safe as long as the mermaid remains in possession of the necklace… until the pirates invade! They’ve returned for vengeance on the town that exiled them and to take the Serpent’s Eye, as well as the audience! Board the ship of the dreaded Captain Sebastian the Black as he takes you captive along with the Princess and the magical mermaid.